Home » In an Instant Pot, How Do You Get Rid of Surplus Water?

Is It Necessary To Use Liquid In An Instant Pot?

How Much Liquid To Add To Instant Pot – Based On Ingredient

What Happens If You Fill An Instant Pot With Too Much Liquid?

What Happens If You Don't Use Enough Liquid In Your Instant Pot?

In an Instant Pot, How To Reduce Excess Liquid

In an Instant Pot, How Do You Get Rid of Surplus Water? 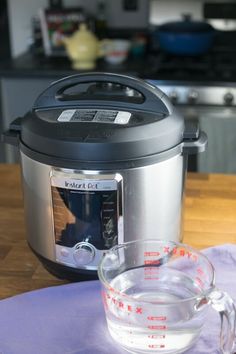 When it comes to using an Instant Pot, there is definitely a learning curve. While I believe that the process is worthwhile, it may not be accessible at times. In fact, when we initially got an Instant Pot, one of the main difficulties I had was the quantity of surplus liquid left behind after cooking.

Water is converted into steam in Instant Pots. As a result, while using an Instant Pot, at least one cup of liquid is always necessary. Adjust the settings to saute mode either before or after cooking to eliminate extra water from your Instant Pot.

Of course, how much liquid you need depends on what you’re preparing and how much you’re cooking?

A spaghetti sauce, for example, would frequently incorporate diced tomatoes, which are already reasonably liquid-based. As a result, you’ll only need a small amount of extra liquid.

Meanwhile, because a stew is liquid-based, it will require extra liquid, most likely in the form of broth, for the end texture to be as expected.

Is It Necessary To Use Liquid In An Instant Pot? 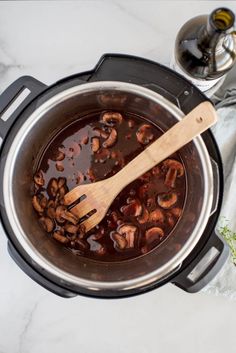 To produce pressure, Instant Pots transform water into steam. As a result, while cooking any meal in an Instant Pot, at least one cup of liquid is always necessary.

Side note: The Instant Pot recommended at least two cups. Still, they have subsequently changed their recommendation to only one cup. That’s why you could see two cups mentioned on the internet or in your instruction manual while I’m just mentioning one.

However, the actual amount needed will likely vary depending on the dish you’re preparing and the recipe you’re using.

Water-based foods, such as tomatoes, mushrooms, spinach, and cabbage, require less water than meats with a higher density, such as steak.

Sauces are the same way. Because they are already liquids, you’ll only need to add a small amount of water to the pot for the meal to cook correctly.

Suppose you’re making a specific Instant Pot recipe. In that case, you won’t have to worry about knowing the right amount of water because it’ll be provided in the recipe. If you’re only looking for ingredients, check out my chart below.

If your specific item isn’t on this list, check for something close or search for ‘[ingredient] Instant Pot’ on Google.

Following that, you’ll most likely find some basic Instant Pot cooking instructions for that specific product. If you’re still unclear, you may take the average of the water content of the top three recipes.

If in doubt, consult the instructions that came with your Instant Pot, which covers the fundamentals of water needs for several essential components and recipes in general.

Suppose you’re converting a traditional recipe to an Instant Pot recipe. In that case, you’ll want to reduce the amount of liquid necessary by half because the Instant Pot’s sealed lid allows for little to no fluid loss throughout the cooking process.

How Much Liquid To Add To Instant Pot – Based On Ingredient

The chart below is a rough guide for how much liquid you should add when cooking a select number of ingredients in the Instant Pot.

What Happens If You Fill An Instant Pot With Too Much Liquid?

It’s critical that you don’t overfill your Instant Pot with food or fluids.

This might result in unsafe pressure levels or clogging of your venting knob. Both of these things are likely to do severe damage to your computer.

On the metal insert bowl of all Instant Pots, a fill line gives direction to guarantee that this does not happen.

If you add slightly more liquid than necessary but still fill the Instant Pot below the MAX line, your food will likely take longer to cook.

It is because the high power takes a long time to bring the vast volume of liquid to a temperature suitable for pressure cooking.

What Happens If You Don’t Use Enough Liquid In Your Instant Pot?

While the liquid is typically found naturally in some meals, an Instant Pot works with it (such as sauces or meats). It’s still a good idea to add more to ensure that the pressure within the pot can build up properly. This is essential to finish the pressure cooking method that will be utilized to cook the items in your Instant Pot.

If you don’t use enough liquid in your Instant Pot, it may fail to reach the preset pressure point and never start the cooking process.

You’ll notice this since the Instant Pot’s timer only starts after the pressure is achieved and the cooking begins.

If there isn’t enough liquid in the Instant Pot, the food will burn and adhere to the inside of the pot instead of cooking. In this situation, you may also get the ‘BURN’ error on your Instant Pot.

In an Instant Pot, How To Reduce Excess Liquid 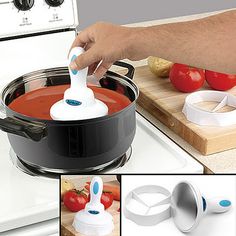 The ways you can use to drain extra liquid from your Instant Pot will most likely be determined by the volume of liquid and the item you’re cooking. I’ve included a few different ways that I’ve discovered to be effective.

In most circumstances, operating your Instant Pot is a matter of trial and error. You’ll ultimately figure out how much liquid to add to each component in order to avoid extra liquid while cooking your meal without difficulties.

Sauté on Low — Depending on the recipe. You may use the sauté option on your Instant Pot to either bring the liquid to a boil before starting the pressure cooking process or to simmer down any extra liquid after the cooking process.

If you use this method, make sure to keep an eye on your Instant Pot at all times.

Use Cornstarch – Cornstarch or plain flour can thicken liquids into a sauce, which can be excellent in some recipes.

I’ve also discovered that xanthan gum works excellent. The correct ingredient will most likely be determined by the food you’re preparing.

Consider the ingredients – Frozen chicken is frequently injected with water to help it freeze more quickly, but mushrooms contain 92 percent water. Consider what you’re going to put in your Instant Pot and use it to guide when adding liquid.

Drain extra — Depending on what you’re cooking in your Instant Pot, you may be able to drain the excess water into a pan to thicken into a sauce or gravy or just into the bin/sink.

Make a note of how much liquid you used in the meal so you may lower the amount of liquid in stages each time you cook to get the correct amount.