Home » What Causes Non-Stick Pans to Warp and How to Fix it?

What causes the warping of a non-stick pan?

Other factors that can cause a non-stick pan to warp include:

What's the best way to fix a bent pan?

Is it a terrible idea to use cold water on a hot non-stick pan?

Which non-stick pan is the best?

Have I answered all of your questions on why non-stick pans warp?

What Causes Non-Stick Pans to Warp and How to Fix it?

Let’s be honest. Non-stick skillets and other kitchen cookware make life much easier for us. However, they can warp, making cooking with them difficult. So I was curious as to why non-stick pans warp.

So I decided to look into it, and this is what I discovered.

When non-stick pans are submerged or filled with cold water directly off the stovetop or right out of the oven while still hot, they distort. Because of the extreme temperatures, the metal in the pans expands and contracts unevenly, resulting in warping. With repeated usage, thin, poorly constructed pans can also distort.

But there’s a lot more to learn about non-stick cookware and what causes it to warp. We’ll also look into whether more expensive models are less likely to warp and, more importantly, how to restore your warped pans!

So let’s keep reading to find out everything we need to know!

What causes the warping of a non-stick pan? 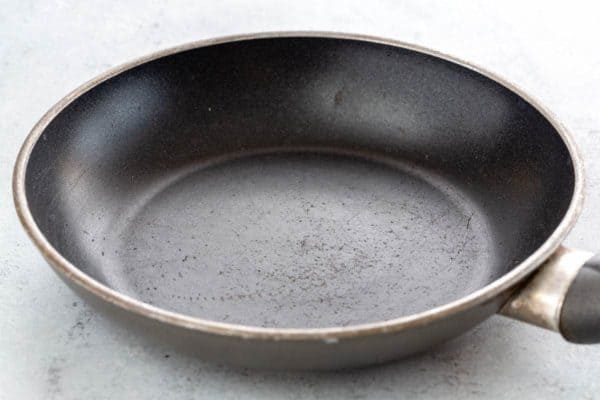 Placing cold water in or under a non-stick skillet or pan while it’s still flaming hot is the most typical cause of warping.

Consider that for a moment.

The action of the molecules causes cold to shrink and heat to expand. Heat accelerates the movement of those troublesome molecules, but cold causes them to slow down.

Therefore, taking a very hot pan off the stove or out of the oven and immediately placing it in a sink, and filling it with cold water is not a good idea. It causes the molecules that have been hopping around rapidly owing to the heat to suddenly cease moving when the cool water comes into touch with them.

When this happens, some areas of the pan contract faster and more than others, especially since the entire pan isn’t usually immersed in cold water at the same time.

Other factors that can cause a non-stick pan to warp include:

What’s the best way to fix a bent pan?

Isn’t this the million-dollar question?

When a pan warps, the flat bottom of the pan bulges up (convex) or bulges down (concave). Alternatively, it may just lose its perfectly round shape.

So here’s what you’ll need to repair it:

A mallet made of rubber. A flat work surface that you don’t mind having a few scuffs on, such as a work table, on which you can set the pan a little, utterly flat piece of wood with the same diameter as your pan’s bottom. To begin, heat your pan on a stove over medium-high heat for about 15-20 minutes when you’re ready to fix it.

Set your pan on its typical flat bottom, on top of a towel in your work area, if the bulge is bulging up with the pan flat in a normal position.

The bulge should be bulging out when you hold the pan in its typical posture, meaning down. Flip the pan over, and make sure it’s on top of a towel on your work desk, as well. When you’re done, cover the pan with a towel.

Then, once the pan is in place, simply tap the bulge with your rubber mallet forcefully and consistently to flatten it out. You can find yourself compensating too much and pushing the bulge in the opposite direction. It’s also possible that you didn’t pound it hard enough to flatten it out. You can keep repeating the heat and pound cycle until the pan is perfectly flat (or at least better than it was).

Sometimes your circular pan isn’t quite round, but it’s not bulging out either. In that scenario, you can take the wood piece and cut it to perfectly fit the pan’s bottom. Then, as mentioned above, heat the pan and pound the wood piece (on top of a towel). Move the wood around the pan’s whole circumference, a little at a time, pounding a few times as you go.

To avoid damaging the non-stick surface, do not pound directly on the pan with your mallet; cover it with a cloth.

This isn’t an exact science, so some trial and error are required. However, as previously stated, you can re-heat your pan and try again until the pan is roughly where you want it to be.

Is it a terrible idea to use cold water on a hot non-stick pan?

Yes, for the reasons stated previously. Allow a hot pan to cool completely before immersing it in cold water or pouring cold water over it. When your pan is smoking uncontrollably, you want it to stop. While it may be tempting to toss it in the sink and run the water. A better option is to place it outside the back door or in a cold oven. When placed immediately in contact with cold water that has just come off the burner or out of the oven, even the most costly non-stick pans will distort. Place your skillet or other non-stick pans on a burner that isn’t in use.

Allow them to cool down naturally after that. To place the pan in water, they do not need to be at room temperature, and it’s too hot for cold water if it’s too hot for you to touch directly.

Non-stick pans that are more expensive do not warp.

In general, you get what you pay for when it comes to cookware.

Pans that are less expensive are frequently made of thin aluminum or stainless steel. Manufacturers use aluminum because it is inexpensive, and they also manufacture thin pans because less metal is used.

“When buying cookware, think… suppose you hit someone over the head with your pan, and you have any doubt as to which will break first, the person’s skull or the pan. In that case, the pan is not heavy enough,” stated famed chef and one of my personal heroes, Anthony Bourdain. So, whether you’re looking for non-stick or non-stick cookware, you’ll want to go with something a little thicker and more lasting. Ideally, choose a pan composed of a durable material and quickly conduct heat over the entire pan for even cooking.

Cast iron pans (which you can also get) have the highest level of durability and, when properly seasoned, can provide an excellent non-stick surface. Enamel-coated cast iron cookware is among my favorites.

However, many people have trouble seasoning and keeping conventional cast iron pans from rusting. Plus, any iron pan is going to be hefty! Because of the health risks linked with metal, I would avoid using uncoated aluminum pans. Heavy-duty stainless steel or coated aluminum are the only two types of pans I would consider. Copper pans may appear attractive at the store, but it is a soft, reactive metal. As a result, it quickly loses its attractiveness once you start using it.

While practically any pan will warp if it comes into touch with cold water while still hot, higher-end pans are less prone to do so.

Other faults that can contribute to warping are almost never present in more expensive pans.

Which non-stick pan is the best? 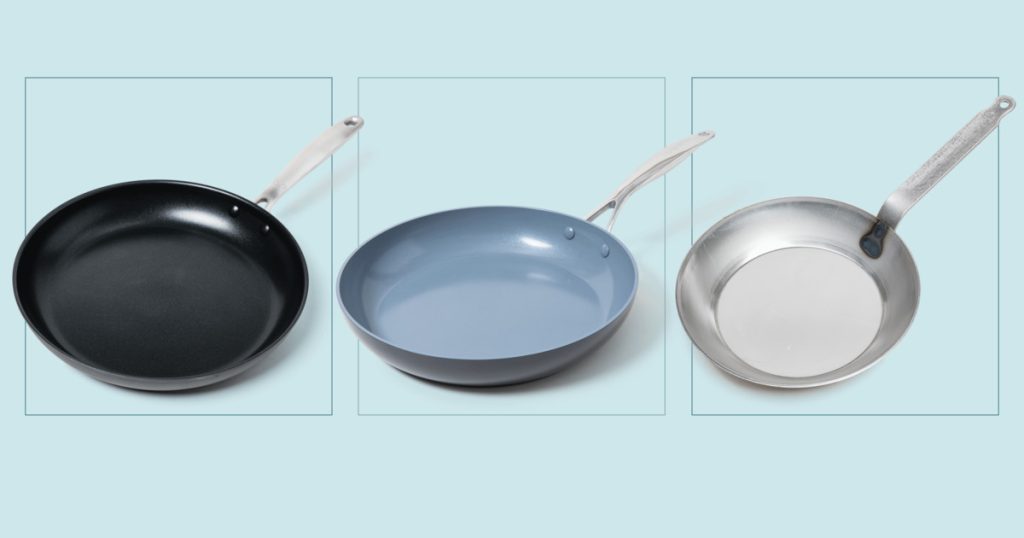 There is much concern these days about the materials used to make non-stick pans.

As a result, a number of them are frequently labeled as “PFOA-free.” Perfluorooctanoic acid (Teflon) is a chemical coating that has long been used on non-stick cookware. Concerns about the consequences of this toxin both in our bodies and as the surface are scraped off are prompting manufacturers to label pans as PFOA-free. However, there are also environmental problems. PFOAs can damage soil and water during the production process. According to the Environmental Protection Agency, drinking water is affected by PFOAs in 29 of the 50 states in the United States.

You now know that it’s better to look for PFOA-free products. You’ll probably have to choose between a standard non-stick pan and a ceramic non-stick pan now. Ceramic pans have become increasingly popular in recent years. On ceramic, however, the non-stick surface tends to scrape off more quickly. So a conventional non-stick pan, such as the Zwilling non-stick fry pans from renowned cookware maker J.A. Henckels.

This pan is 40 times more durable than conventional non-stick fry pans in terms of how quickly the coating scrapes off. I practically guarantee that it will never warp if you don’t drop it or fill it with cold water directly off the stovetop or out of the oven! Their pans have excellent Amazon reviews, are Amazon’s pick products, and include free Prime shipping. The PFOA-free non-stick coating is applied to an aluminum base in Italy.

Of course, there are concerns about aluminum and how it impacts human health. Still, those issues tend to fade away when it’s covered with a non-stick surface. There are other sizes available, but the 11-inch fry pan is ideal for me. I was pleasantly surprised to notice how cool the handle remains when the pan was hot!

Have I answered all of your questions on why non-stick pans warp?

I conducted a deep dive into the world of non-stick cookware in this essay. We looked at what causes a non-stick pan to warp. Whether higher-end pans are immune to warping, and what to do if your non-stick pan does warp. Enjoy the ease of non-stick cooking without the headaches of a pan that won’t remain level on your burner.