Home » When Is It Safe to Open the Instant Pot?

How Will I Know If My Instant Pot Is Safe To Use?

In an Instant Pot, what is a quick release?

What Is An Instant Pot's Natural Release?

If the lid of your Instant Pot won't open, here's what you should do.

How to Clean the Lid of Your Instant Pot

How to Replace the Lid on Your Instant Pot

When Is It Safe to Open the Instant Pot? 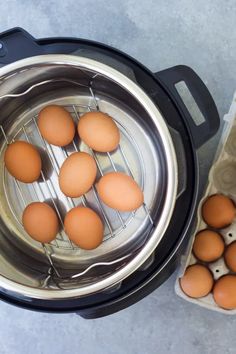 I was both terrified and perplexed when I initially received my Instant Pot. “When do we know if it’s safe to open?” was one of the most often asked questions during my trial run with the machine.

A float valve is included with every Instant Pot. It’s a metal tip that’s usually dipped under the lid’s black plastic top.

The Instant Pot is completely pressurized when the valve is up and in line with the rest of the plastic, and it cannot be opened - a safety device prohibits it. It’s safe to open your Instant Pot after this valve is down and clicking.

How Will I Know If My Instant Pot Is Safe To Use?

Before you open the Instant Pot, please wait until the float has dropped back into the plastic (though you will still be able to see it).

If the instant pot appears more like the image below, with the metal valve still visible, it has not depressurized and is dangerous to open.

The length of time it takes for the Instant Pot to depressurize is determined by whether you switch the vent from sealing to venting.

When modifying this setting, keep your head away from the Instant Pot and adjust it using a tool rather than your hands because the machine will most likely be quite hot.

Suppose your Instant Pot is set to rapid release. In that case, you’ll be allowed to open the lid roughly two minutes after the timer stops counting down (the actual duration may vary depending on the setting and temperature you’ve been using the machine on).

Quick-release means that the steam comes out of the vent at a higher volume, which may be more dangerous, so allow the machine some room (don’t put it behind a cabinet) and keep your face away from it during this period.

To open the Instant Pot lid, spin it counterclockwise until the arrows on the lid match up with the ‘open’ arrows on the machine. If the machine is turned on, it will begin to play a lovely tune.

When opening your Instant Pot, make sure the inside of the lid is facing away from your face.

In an Instant Pot, what is a quick release?

Quick-release and natural release are the two methods for releasing pressure from an instant pot. Which one you use will be determined by the amount of time you have, what you are cooking, and how you want to cook.

Though the instant pot’s safety lock operates the same way in all settings, this may create a delay in opening the pot.

While the rapid release is obviously faster, if you are not careful, it may also produce a mess and be dangerous. The rapid release of steam and pressure may create a delay in the pressure exiting the pot completely. The tiny metal clasp will have fallen when the instant pot is ready to be opened.

If you want to utilize the fast release, you’ll have to wait between 2 and 5 minutes at the most. I recommend using a long tool to keep your hands away from the steam. Turn the black nozzle to venting until it clicks up; this will fully open the vent, allowing the pressure to escape.

What Is An Instant Pot’s Natural Release? 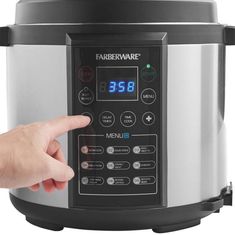 On the other hand, there is a natural release for quick pots, which is the most frequent method because it is gradual, steady, and considerably safer.

The natural release occurs when the black nozzle on the lid is set to venting; once set to venting, the lid will progressively depressurize naturally over the course of 10-15 minutes.

The natural method is safer, creates less of a mess with water splattering all over the place, and is more straightforward. The metal tab will fall and click when the pot reaches a particular degree of depressurization.

The screen will flip to L000 during the natural release, which is the timer for how long the food has stopped cooking and the natural release has occurred. Different meals and recipes will require different release periods, so keep that in mind when you set your instant pot to release.

As time passes, the timer will increase in minutes; however, this does not indicate that the release is complete; that can only be determined after the metal valve has fallen.

If the lid of your Instant Pot won’t open, here’s what you should do.

You may have a problem with your Instant Pot if you are unable to lift the lid after the pressure has been released and the metal valve is down.

Before attempting any of the following approaches, I recommend that you wait at least 15 minutes on the rapid release option. It will guarantee that there isn’t a problem with the pin or valves (such as a piece of food lodged in them), causing the machine to give you a misleading ‘open the lid’ indication.

The first thing I’d do is make sure the sealing ring isn’t trapped. To ‘unstick’ the ring, you’ll need to apply some extra pressure to the lid.

Suppose this is the issue and you are able to open the machine. In that case, I recommend removing the ring from the lid and cleaning it according to the manufacturer’s instructions before resetting it to prevent this from happening again.

I’d then slightly jiggle the pin to ensure it wasn’t snagged on anything. Instead of using your hands, I’d use an item like a knife.

Again, make sure the pressure has subsided before proceeding, and continue with extreme caution. The pin on the lid is a safety device that prevents the lid from opening if the machine is still under pressure.

If you’re still having trouble getting the lid to release, I’d recommend contacting Instant Pot directly, as they may be able to help you with your unique problem.

How to Clean the Lid of Your Instant Pot 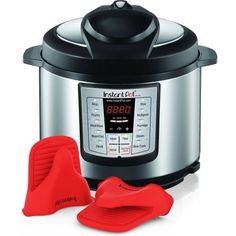 The Instant Pot lid comprises two parts: the actual lid and the silicone ring that fits within. Because the silicone ring is one of the machine’s most essential components, it should be cleaned with care. New machines should come with a replacement ring, and you may buy more online.

It’s most likely the silicone ring inside your Instant Pot lid that’s causing the odor. Separately from the Instant Pot’s main lid, this has to be cleaned (which is suitable for the dishwasher).

I’ve discovered that wiping out the Instant Pot lid with a moist towel is usually all that’s required. It is, however, safe to put in the dishwasher. The sealing ring and anti-block shield need to be removed first, though.

How to Replace the Lid on Your Instant Pot

If your Instant Pot lid is damaged beyond repair, you may buy a new online. Replacement lids for all of the primary devices are available on the Instant Pot website. Depending on the machine, they might cost anywhere from $30 to $60. Orders above $50 qualify for free shipping, which might take up to three weeks.